BOTSWANA: A MAGICAL UNIVERSE AT THE BEGINNING OF TIME

Even being charged by a herd of wild elephants could not dampen my enthusiasm for this beautiful country. My husband and I have traveled there twice now and have loved it each time. However, getting there the first time was not so easy.

I should back up to the events leading up to the first safari trip my now-husband and I made to Botswana. At the time I was still practicing law and had an extremely heavy caseload with little to no control over my schedule. Taking off to travel to the other side of the world with little to no communication (i.e., no cell phone or Blackberry reception) seemed quite undoable. Plus, I was quite scared to go on the trip. Riding in an open-air jeep with lions, leopards, hippos, rhinos, and other dangerous animals all around just seemed -- well quite dangerous.

However, my clever now-husband had two strategies up his sleeve to convince me to go. One was to ask everyone we knew if they had been on safari and, if so, whether they liked it. Of course, everyone who had been on safari before, replied with an enthusiastic yes. The second, more long lasting and impactful strategy was that he bought a “fancy” camera for me for the trip. Neither one of us knew a thing about cameras at the time, but fortunately the salesperson had the foresight to recommend a 70-300mm telephoto lens, and that made all the difference.

When we landed on a small dirt airstrip in a six passenger plane in Botswana, I was absolutely stunned. Everywhere you looked, there were different types of animals -- some roaming around on the “runway.” What I did not see was a scintilla of human existence -- no signs, no trash, no fences, no telephone towers, no wires, no roads, no structures, no humans except the driver who picked us up to take us to our camp. I remember having the feeling that we had been dropped into an alternative universe.  Not only did it feel like a magical, alternative universe, but it felt like we had time-traveled back to the beginning of time. It was pure, simple and amazing to see giraffes, zebra and impala roaming around the landscape as we made our way to the camp to settle in and eat dinner.

The next day when we went out on our first official safari run, thanks to our superb, uber-knowledgeable guide, we were very fortunate to find a leopard up in a tree with no branches against a gorgeous blue sky. This is where I took my first photos with my new “fancy” camera with the telephoto lens. I was absolutely amazed at the results. I was able to capture every single hair clearly on the leopard in the photos, as well as the gorgeous eyes and its cute pink tongue. That was it. I was hooked on photography from that moment on. One of the initial photos from this shoot is below.

Leopard On The Lookout

For the rest of the safari, I took so many photographs that my husband and the guide were having fun laughing at me. I think they had more fun laughing at me taking photos than watching the wildlife. My husband and I fell in love with our guide and tracker, both of whom were incredibly warm, genuine, hospitable, kind and most importantly, incredibly knowledgeable in all things wildlife.

This came in handy the day we had a rather heart-stopping experience. It was on the third day, after I had finally gotten comfortable with the notion that if you are in the jeep, not talking loudly and not standing up, the animals just ignore you – including lionesses who, in our experience, were literally right next to the tire of our jeep for a while. It is as if you are not there.  Well. . . . . not so fast. On this third day, we were watching a herd of elephants far in the distance. The jeep was stopped so we could watch them from afar. I was taking photographs of them and they were traveling across the area from where our jeep was parked. After a while, however, I noticed they changed direction and started coming directly toward our jeep. I was continuing to take photographs until I realized the whole herd of elephants was right on top of us (well, 5 meters from our jeep – we measured afterwards).

The lead elephant was pregnant and she was mad. The elephants were stomping their feet, raising and lowering their trunks and making a lot of noises to let us know they were unhappy. They walked part way around the jeep. Our guide keep saying, stay calm Kay. Hmm. I was not seeing a Plan B. We could not start the jeep and try to outrun them. Just starting the jeep would startle them enough to cause them to charge for sure. I did not see any guns in the jeep – and even if there was a gun, or two, I didn’t think it would help against an entire herd of elephants. Getting out of the jeep and running was obviously the worst thing to do. So, first I broke eye contact with the lead elephant and put my camera down. Then I bowed my head down, took deep breaths and waited and prayed, waited, and prayed, waited and prayed, and waited and prayed. After what seemed like an eternity, the elephants apparently just got bored with us and moved on. Whew!

In addition to Botswana, my husband and I have been on safari in South Africa and Zambia, both of which are amazing as well.  During the safaris I have been on, I have taken thousands of photographs. In between the trips, I studied the art of photography intensely. I immersed myself in the world of photography and my motto became “Photography Feeds My Soul.” Recently I was asked by a store that carries some of my photography products – the David Orgell store in San Marino, California -- to create a safari theme line of products for them, which makes perfect sense in light of the fact that when you first walk in the store, you see large, gorgeous silver leopards and jaguars. I wanted to create something very creative and unique for the project, in addition to the documentary photos from my safari trips.

I worked very hard and created a series of unique, magical-looking images. I took some of my photos that I had taken in Africa and then worked on them in post-processing. I used a number of techniques, including textures, brush strokes and other techniques to make the images have a magical and  “painterly” look. I had several of these images printed on canvas and included them in some of my Exhibitions. The combination of the relatively rough texture of the canvas, combined with the “painterly” techniques I used during the post-processing of the images resulted in the final, printed images looking like paintings when you see them in person!  Very cool.

One of the favorites in this style is my “Zebra Quartet in Lavender,” which is an image that started with a photo I took in Botswana of four zebras "posing" in unison for me. In post-processing, I put them in a field of lavender against a beautiful colorful background. It may sound unusual, but it is a beautiful, creative image that has turned out to be very popular.  You can see this image below. 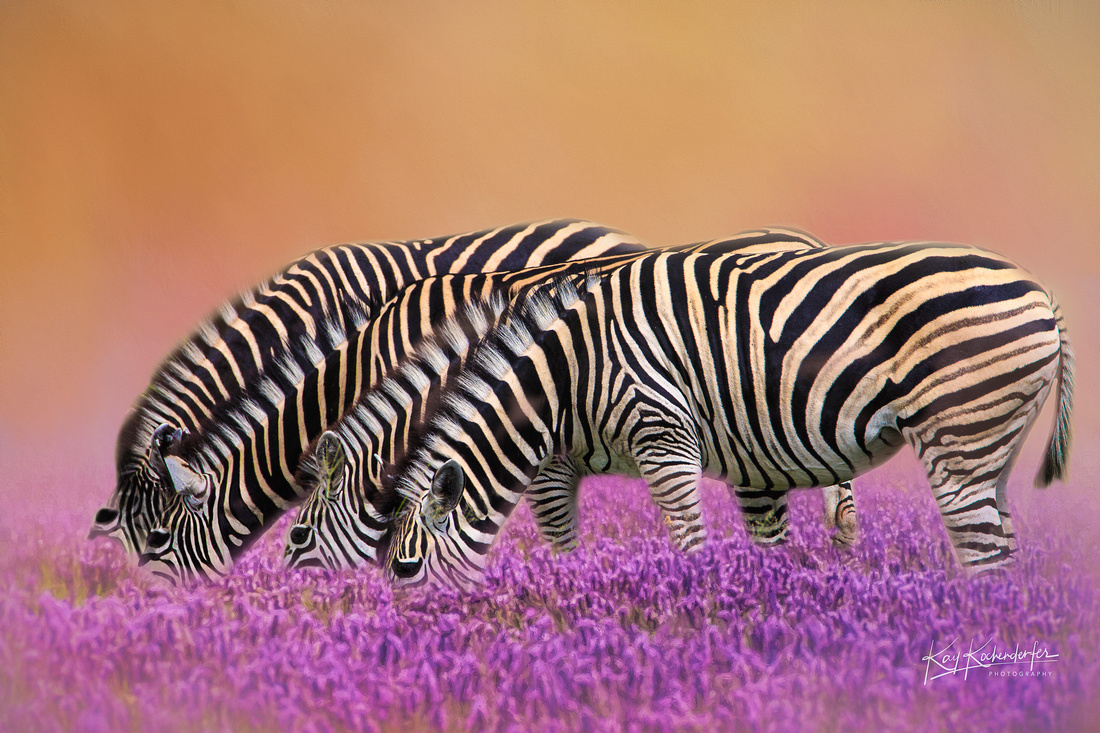 If you have not been on safari, I highly recommend it. Take it from someone who was 100% opposed to it initially. I owe a big debt of gratitude to my husband for his persistence. Not only was the trip amazing, but I ended up discovering a new life passion in the process – photography. In a “truth is stranger than fiction moment,” my husband told me years later that when he bought the camera for me he had a feeling that somehow it was going to end up being very important for me. I think I married the right man!

Here are a couple of additional photos from my safari trips. You can also see more on my website in the “Safari” gallery. Happy viewing!!! 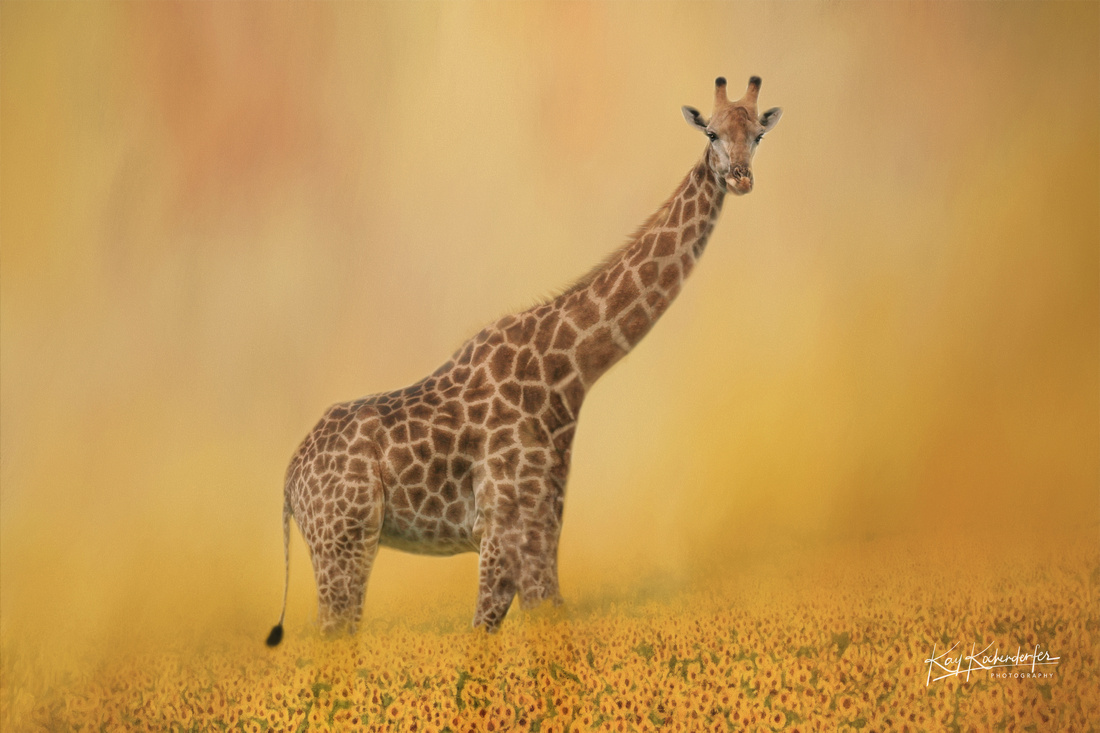 Giraffe Strolling Through Field of Sunflowers 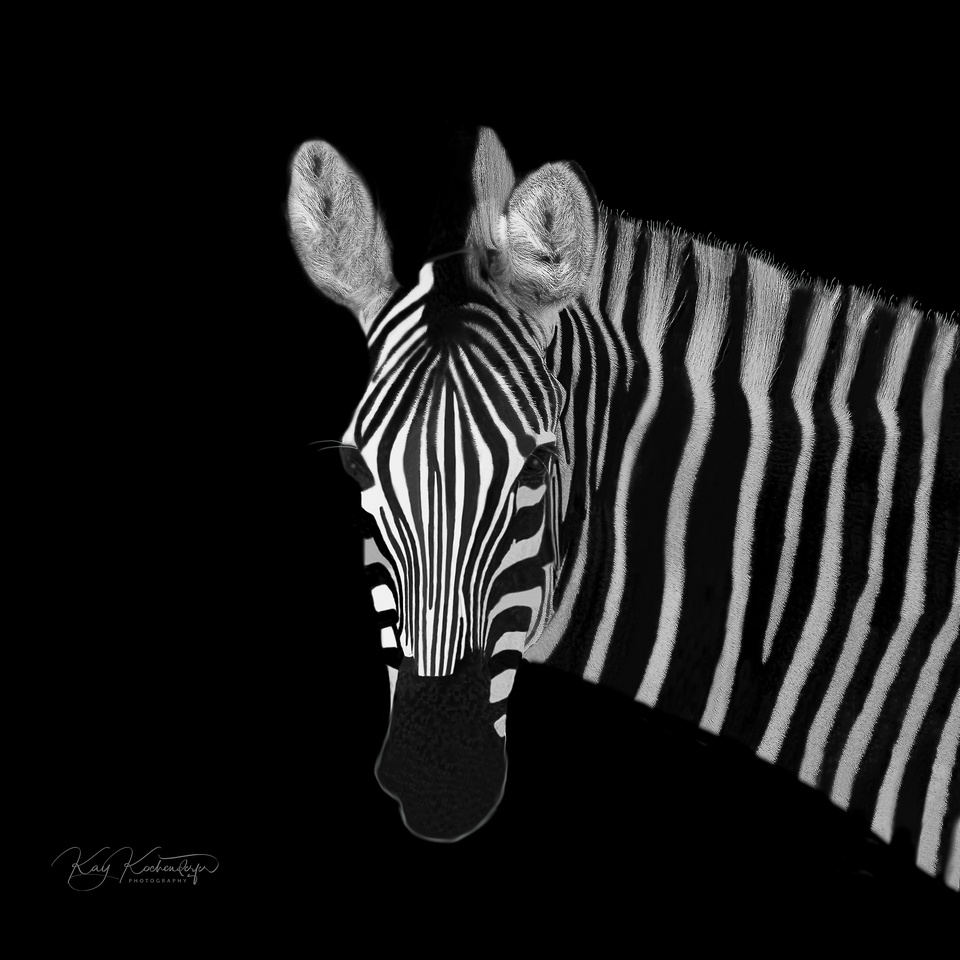